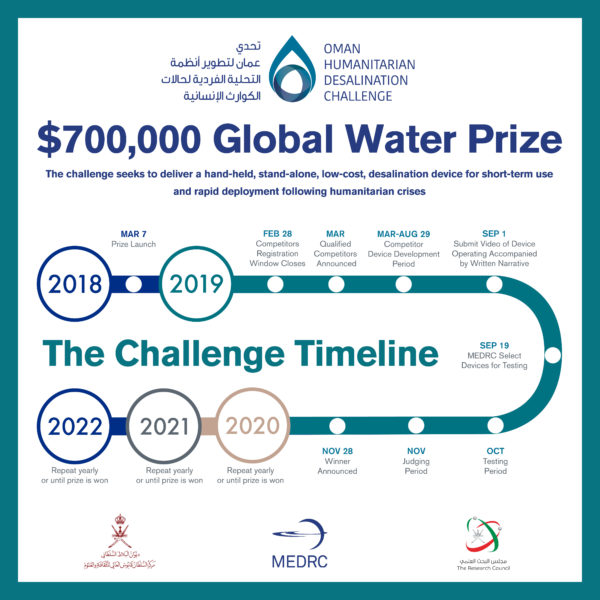 Posted at 09:40h in Uncategorized by medrc

Muscat, September 15, 2019: The Oman Humanitarian Desalination Challenge is a 700,000 USD global water prize led by MEDRC Water Research and The Research Council of Oman (TRC) and funded by The Sultan Qaboos Higher Center for Culture and Science.

Announced in March 2018, the challenge calls for the delivery of a low-cost, stand-alone, hand-held desalination device, that would be suitable for short term use and rapid deployment in the event of a humanitarian crisis.

The submission window for competitors devices closed on September 1, 2019 and the challenge has now entered the judging phase.

From the original pool of 90 applications and following a preliminary review round when 46 teams were announced as qualified competitors, 15 teams have completed the challenge within the set time frame and submitted their device for the judge’s review.

Submissions have been received in the form of a video show casing the device in operation with an accompanying written narrative detailing how the device meets each of the prize criteria.

MEDRC will review each submission before inviting a select few devices for onsite testing.

Testing will be conducted at the MEDRC facility by an international panel of expert judges and is expected to take place in November.