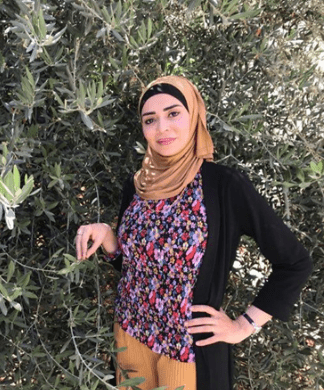 Posted at 09:17h in Uncategorized by medrc

MEDRC catches up with a researcher from Ramallah who participated in MEDRC’s Water Research Fellowship Program in 2012 and who is now about to establish her own company. When Rinad Hamed starts talking about her research it feels like you are walking next to her among the rows of alfalfa and broad beans. Her enthusiasm is infectious.

The conversation is brimming with words like rhizobacteria, phytoremediation, hydroponics, PGPR’s and TDS. But the word “solution” is probably her most used word, as Rinad is determined to find the key treatment to making crops suitable for cultivation on salt-affected soil in Palestine. Her research contributes to finding alternatives to the use of fresh water in the agricultural sector, the most water-consuming sector in Palestine.

Luckily, she was able to make time for a phone call in between her research, PhD exams, her family and organizing the 2020 MEDRC Alumni Forum which will take place later this year. She is happy to talk about her research projects, which were rewarded with MEDRC Innovation Initiative awards in 2018 and 2020.

Her 2018 project was an expansion of earlier research for her Master’s degree in Applied Chemistry, in which she used plants to extract salt from brackish water discharged from a desalination plant in Jericho. She used certain rhizobacteria -microorganisms that are naturally found in a plant’s root system- to treat the seeds of Barley and Malt plants to increase their salt tolerance. With this treatment, the plants’ growth improved, as well as their ability to extract salt from the water. For the Innovation Initiative Rinad broadened her scope, applying the same coating technique for the treatment of Alfalfa, Broad Beans and Guar seeds. She also started working with a hydroponic system for the cultivation of saline-stress tolerant crops.

“I have always been concerned about the environment, even as a child. And I always wondered how some people seem not concerned at all”, she says. That is why she wants to spread the message about environmental issues and water scarcity. In her spare time, Rinad makes illustrations and educational films about environmental topics. She also works with schools in Ramallah, where she creates exhibitions with pupils.

With the second Innovation Initiative award Rinad is laying the foundation for her own company, a coating and germination lab and, alongside it, consultancy services for farmers, seed companies and others in the industry. She is currently planning a feasibility study and developing a business plan. At the same time, work on the testing fields in Jericho and Ramallah continues, with beans, corn and Guar. Rinad has high hopes for the Guar plants: “It is the first time this plant is introduced here. It comes from Sudan and is grown in arid conditions, similar to Palestine. So I expect it to do well here”, she explains. Guar is used as a component in paint, food colorants and artificial gum. Because it is high in protein it can also be used as fodder for livestock. The results from Ramallah are promising, with lots of beans and beautiful green leaves. But in Jericho, the plants were affected by the high salinity of the soil, which is more saline than elsewhere in Palestine. That doesn’t stop Rinad: “It needs further research, but I am determined to find a solution!”