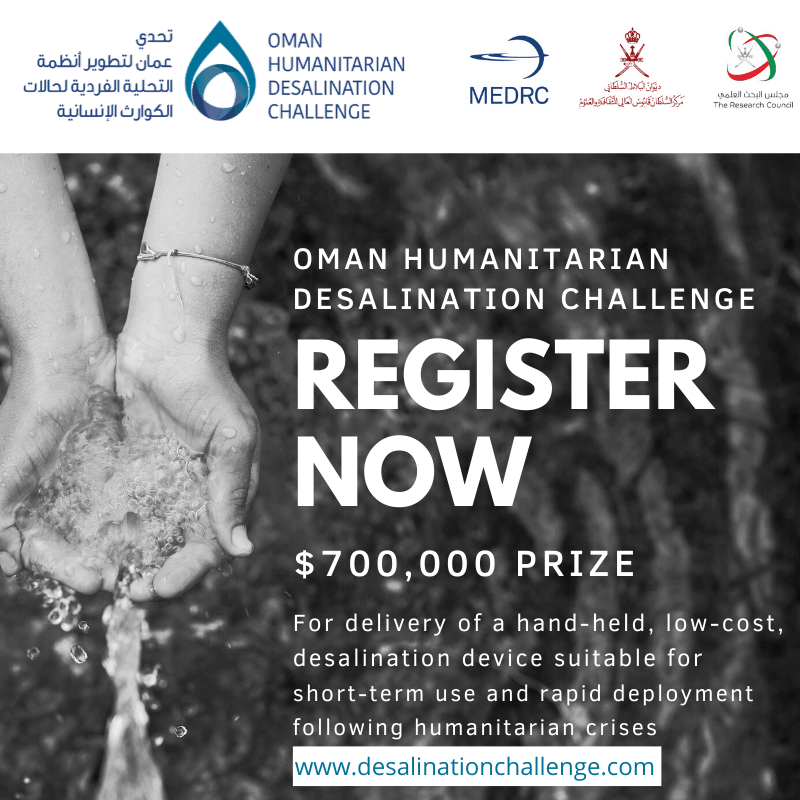 MEDRC has today announced the opening of team registration for this year’s Oman Humanitarian Desalination Challenge Prize Competition. The Competition is a global water prize that looks to award 700,000 USD to the person or team that can invent a small, cheap and easy to use desalination device that would enable people in emergency situations to single-handedly purify salty or contaminated water to a safe drinking standard.

Today’s announcement comes after MEDRC has completed the screening process for all of the 2019 entries and officially declared that no winning device has been found.

A joint initiative led by MEDRC and The Research Council (TRC), funded through the Sultan Qaboos Higher Center for Culture and Science, the Oman Humanitarian Desalination Challenge Prize Competition was first launched in Muscat in 2018. The project allows a five-year window to award the prize, with applications re opening every year until 2022, unless a winner is declared in the interim.

The complexity of the challenge and the enormity of the cash prize has helped to attract global attention.  MEDRC reports that close to 100 registrations were received in 2019 from 30 different countries around the world. Competitor backgrounds were notably diverse, with leading water research entities, commercial organizations, entrepreneurs and individual problem solvers all looking to participate. Following an initial screening process conducted by MEDRC, 46 qualified teams went on to participate, 15 of which reached the deadline to submit their entry in September 2019. Three devices were considered to be in contention for the prize and the teams were subsequently invited to submit their device to MEDRC for the final phase of the screening process.

On opening the application for 2020, MEDRC Center Director, Ciarán Ó Cuinn said ‘This is not an easy challenge.  It demands great ingenuity and innovation and will drive dramatic technological leaps in desalination. A winning device would be a humanitarian game-changer, both in emergency response situations and in broader humanitarian terms, as it would for the first time, allow individuals to independently and inexpensively purify salt contaminated water”.

The Oman Humanitarian Desalination Challenge prize competition specifically looks to deliver a hand-held, stand-alone, low-cost, desalination device for short-term use and rapid deployment following humanitarian crises.  Submitted devices will be measured against each of the following prize criteria;

www.desalinationchallenge.com for further details or to apply