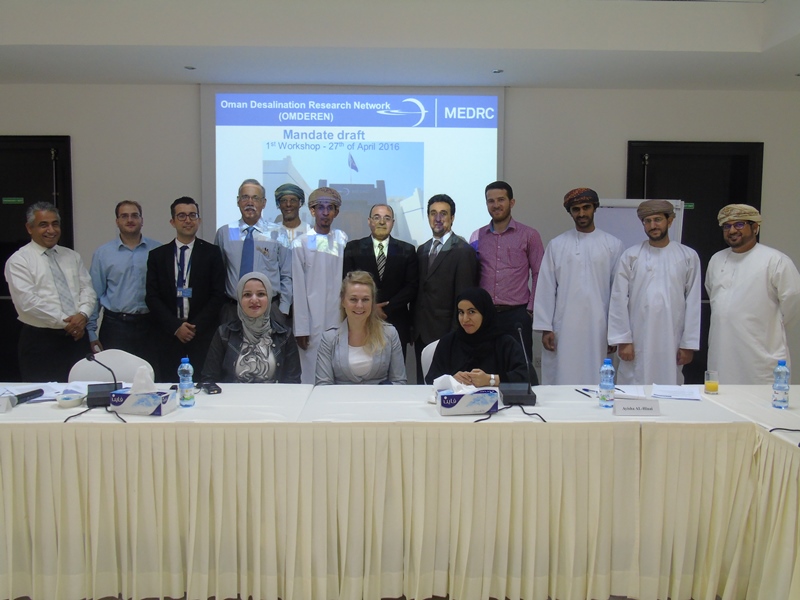 Oman already has many excellent researchers working on desalination technologies and related topics in Oman. This MEDRC initiative aims to support coordination and cooperation between them.

“This network will have a clear mandate to explore the possibilities for environmentally sustainable water desalination in Oman and the viability of its use,” says Dr. Jauad El Kharraz, MEDRC Head of Research.

“The idea of gathering the desalination experts is also to make their research more visible, and identify who is doing what to boost synergies and build collaborative works and joint projects.”, he added.

The first meeting of the Network brought together many desalination research exerts in Oman, mainly the young new generation of Omani researchers who have committed to identifying research needs and priorities and deliver recommendations for decision makers and industrial companies as well as suggesting ways forward for desalination with reduced energy cost and reduced or zero environmental impact.

They agreed to work on topics considered of priority:

One of the proposals was to involve farmers in activities aimed at solving their problems with the desalination systems at their farms (mainly the problem of the brine disposal). An action plan has been set, and some collaborations will be announced soon, mainly between MEDRC and SQU on building an evaporation pond to develop a further research on brine management, and between MEDRC & GUTECH on training activities.

The participants got also the chance to visit MEDRC RO Pilot plant at the end of the meeting. The next workshop will be organized in October.

MEDRC is a non-profit international organization and a recognized research institution that specializes in desalination technologies and renewable energy integration into desalination, with the aim of finding solutions to fresh water scarcity in the MENA region.