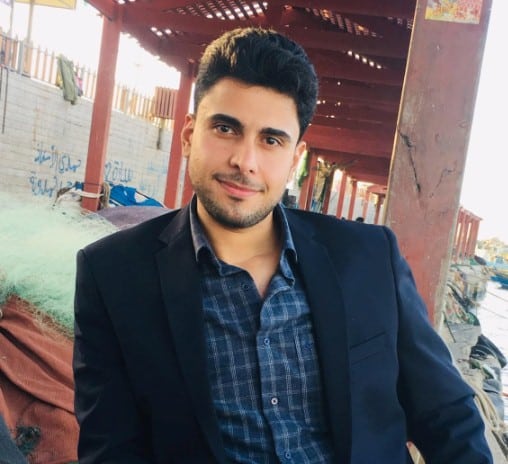 Posted at 06:01h in Featured, Uncategorized by medrc

It started when he was young, he wrote in his research proposal for MEDRC’s MSc Fellowships in 2019. ‘TV shows and films like Good Will Hunting, Sherlock Holmes and A Beautiful Mind captured my imagination. Watching these clever people solve complex equations or puzzles, the way their thought process was visualized with fascinating graphs and mathematical symbols, I thought: I want to be like them.’

That is when Khalid Elejla got into coding. In his first years at Gaza Islamic University, he spent so much time programming and playing simulation games that he got his professors worried about finishing his coursework. But by the time he had to choose a topic for his Master’s, his fascination proved to be a major advantage. Having learned the basics of coding and computational modeling, it was now time to put his knowledge to the test. Khaled: ‘I thought to myself, the most important thing is to choose a topic I will enjoy’.

MEDRC’s Fellowship Award enabled him to carry out his research project Numerical Simulation of Wastewater Pollutants Dispersion in Coastal Waters. He created a 3D model that helps determine the best way of discharging untreated or partially treated wastewater into the sea, in order to limit the degradation of the marine ecosystem and the associated risks to public health. It is based on a case study of a permanent outlet of partially treated sewage located near Gaza City. Such models are important in water quality research, to assess the extent to which diluted wastewater meets environmental standards and the impact of the effluent on the receiving water body.

For Gaza, the results of the study can be used to designate areas where the water quality is suitable for recreation and areas for industrial purposes. If developed further, they will be applicable in many areas in the water sector. For example providing key information for the selection of seawater intake locations for desalination plants. ‘I would have to conduct this research along the coast of Gaza. That’s enough research material for a PhD and more’, says Khaled.

To measure pollution levels, Khaled looked at the presence of four key bacteria and nutrients: the microbial contaminants fecal coliform and enterococcus, bacteria that occur naturally in the intestinal system but which indicate the potential presence of fecal pollution and disease-causing bacteria in water; and nitrogen and phosphorus, of which large amounts stimulate the growth of algae, which can disrupt the marine ecosystem.

The next step was to simulate the dispersion of pollution particles in the seawater in different circumstances. For the computational model to be accurate, Khaled had to include a wide variety of parameters, taking into consideration whether the wastewater is discharged through a single port diffuser or diffuser with multiple ports. Also, how deep and far the outfall pipe extends into the sea. Then there are ambient factors, such as the shape of the sea bed, wind speed and direction, tidal waves, water density and water temperature. With the inclusion of all these variables, Khaled was able to simulate how a pollution plume behaves in the seawater.

His 3D visualizations look almost sci-fi. Is he a step closer to the brilliant scientists from the big screen? Khaled, laughing: ‘On a 1-10 scale? I’m probably at 4 and I will never reach 10. But remember that the genius of A Beautiful Mind turns out to be delusional at the end of the movie.’