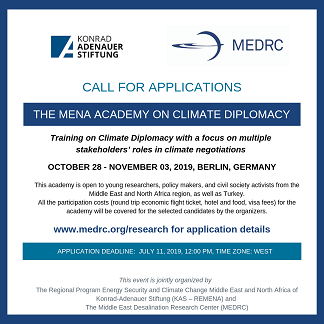 In its efforts to foster dialogue and collaborations among the various stakeholders involved in climate change adaptation and mitigation, the Regional Program Energy Security and Climate Change Middle East and North Africa of Konrad-Adenauer Stiftung (KAS – REMENA) and MEDRC Water Research will co-organize the Middle East and North Africa Academy on Climate Diplomacy, due to take place on October 28 to November 03, 2019, in Berlin, Germany.

Climate change is one of the greatest challenges of our era. Increasing water scarcity, more flooding and extreme weather events threaten millions of livelihoods across the world. This development can lead to more migration or trigger violent conflicts as witnessed in the Middle East in the past years. There is an urgent need for action on multiple levels, especially cross-governmental collaboration which has the potential of mitigating climate change through countries’ commitment to their Nationally Determined Contributions (NDCs) and to international climate policy.

Climate diplomacy builds not only on the power of policy makers, but also that of the private sector, civil society activists, and the scientific community. Climate diplomacy utilizes the combined efforts of the different stakeholders as a tool to achieve foreign policy objectives to promote peace and sustainable development. In recent years, the dire need to include climate in the agenda of foreign policy has been called for – namely through climate diplomacy. But how does climate diplomacy actually happen? And how will it continue to shape the international efforts to confront the issue far beyond the Paris Agreement of 2015? Technology would be key to achieve the objectives, but politics are important as well in the form of traditional inter-state diplomacy in order to avoid negative social effects of the decarbonizing transition measures, especially in sensitive sectors such as industry and agriculture. Stronger climate ambition relies on the creation of positive feedback between the real economy, political interests, and diplomacy.

The Konrad-Adenauer-Stiftung – REMENA together with MEDRC Water Research aspire for this academy to demonstrate the importance of climate diplomacy in dealing with the most challenging regional and international environmental, economic and social issues. To demonstrate this, the academy will bring to the table concrete examples and simulations. This training aims at providing a platform for young policy makers, researchers and civil society activists from the MENA region, to acquire the necessary tools of climate diplomacy. This platform will also be a chance to exchange and combine synergies for finding solutions to the global climate challenge with experts both from the MENA region and Europe.