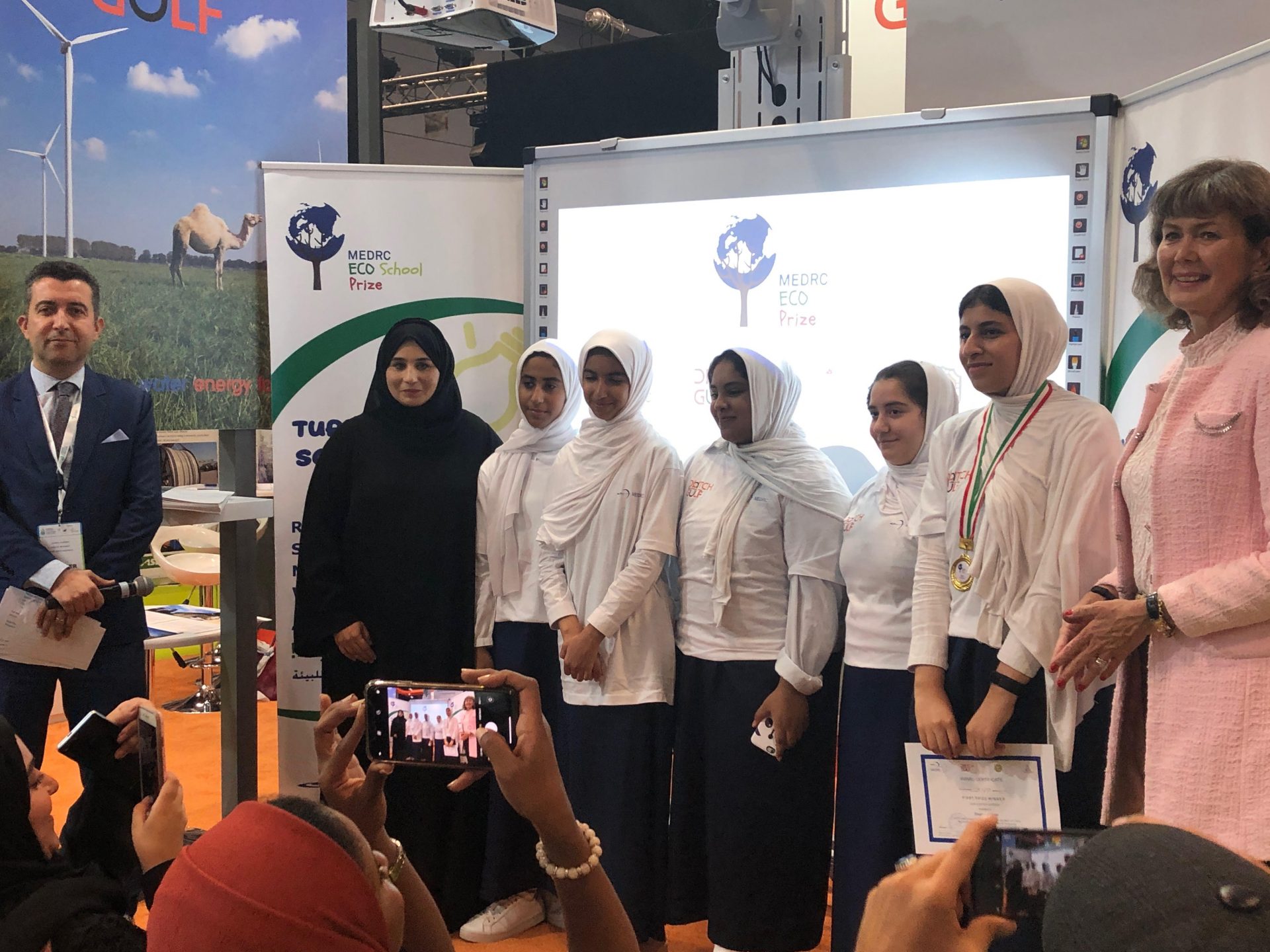 Fatima bint Al Waleed School in Seeb, have been announced as the overall winners of the MEDRC Eco School Prize at a ceremony held at the Oman Convention and Exhibition Centre today, during the Oman Energy and Water Exhibition and Conference.

Sponsored by the Embassy of the Kingdom of the Netherlands, the inaugural inter-school competition was launched by MEDRC on World Water Day in March of this year, at a celebratory event at the organization’s headquarters in Al, Hail, Muscat. The prize is designed to build greater water and energy awareness among school students in Oman by teaching them of the importance of both and why conservation of natural resources is vital for sustainable development.

Presenting the awards, the Ambassador of the Netherlands in Oman, H.E Ms. Laetitia van Asch said, “All around the world we see that young people are concerned about their future. Involving schools and students in saving our valuable resources such as water and energy we create a real impact. Together we can influence positively one of the most defining issues of our time: a sustainable future for you and your children”.

The winning prizes included a Horizon Energy Box – a state of the art teaching tool that provides a complete understanding of how fuel cell technology (hydrogen, salt water & ethanol) interacts with renewable energy sources to create an entirely sustainable power grid. The Energy Box can be used by the schools STEM teachers to conduct countless experiments showing many scientific principles at work in a fun and engaging way. Fatima bint Al Waleed School also walked away with a custom-made sand and gravel filter which can be used in the classroom to show how the process of natural filtration occurs and how clean freshwater is produced.

Five schools (Musab bin Zubair, Sheik Nasser Al Kharusi, Aisha Al Rasbia, Fatima bint Al Waleed, Um Saad Alansaria) were nominated by the Seeb office of the Directorate General of Education to compete for the prize. Each school appointed a student steering committee to draft and enact a school conservation policy, measure and record improvements in usage and to help spread a message of conservation throughout the schools and their communities. Students implemented awareness campaigns through social media campaigns and by mounting posters at water and energy points of use throughout the school, urging students to be proactive and to adopt simple but effective measures such as; reporting water leaks, turning off dripping taps, turning off the lights and AC in unused rooms and setting AC thermostat to an optimum temperature.

School steering committees were invited to visit MEDRC’s water research and training facility in Al Hail where they learned about the water cycle, Oman’s water resources and the use of desalination as a means to boost water supply. To get a greater understanding of water and energy conservation practices in building design, students were received by Dr. Salah Al Saadi, Assistant Professor of Building Energy Systems at the ECO House at Sultan Qaboos University, who also advised extensively on energy conservation methods.

MEDRC’s Center Director Mr. Ciarán Ó Cuinn said, “Engaging young people in conservation activities changes their own attitudes and behaviors, but more importantly it inspires change in society as a whole. Young people are powerful motivators and communicators and can drive and inspire change in their communities. The MEDRC Eco School Prize proudly recognizes their contribution and encourages them to continue addressing today’s global challenges in the pursuit of sustainable development goals.”

To showcase the learning and understanding developed by the students throughout the competition, they worked on creating engaging short videos for social media distribution. The pupils/students were solely responsible for ideation, planning, storyboard, recording and editing of the projects.

An esteemed panel of judges with representatives from Diam, the Embassy of the Kingdom of the Netherlands in Oman, MEDRC, the Directorate General of Education for the Governorate of Muscat, The Research Council (TRC), Sultan Qaboos University (SQU), and the Oman Film Society were tasked to select overall prize winners as well as a best video award.