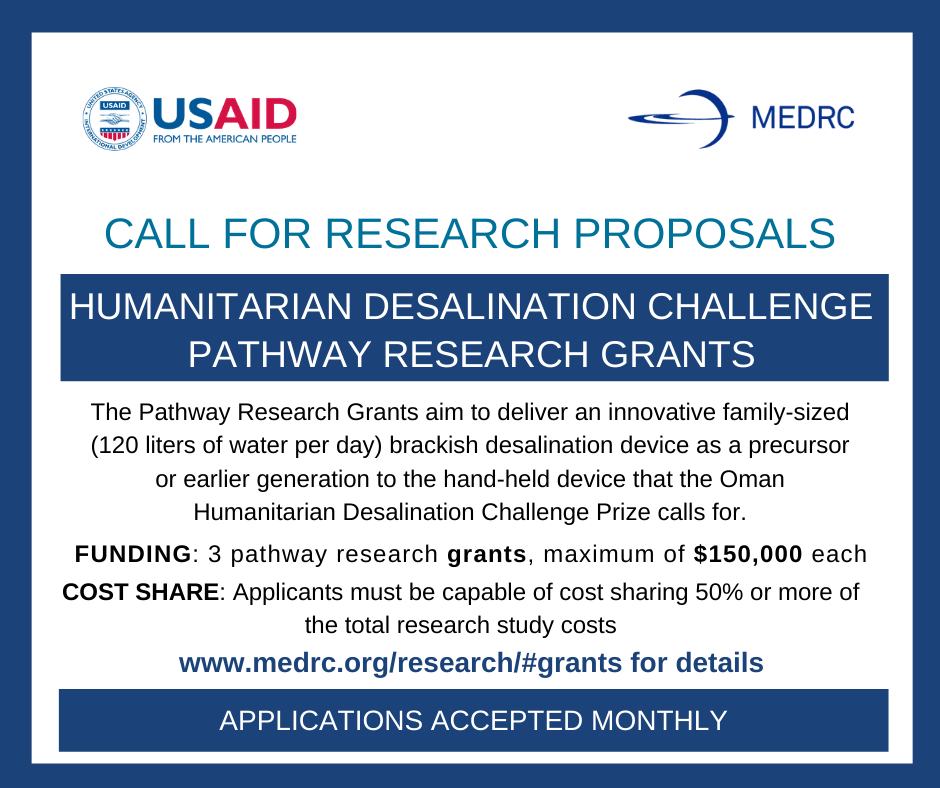 Posted at 08:54h in Uncategorized by Alya

In partnership with the United States Agency for International Development (USAID), MEDRC has launched an international call for research proposals in a bid to spur innovation in small scale desalination technologies.

To engage the broadest possible community of researchers and innovators from across the world, MEDRC’s desalination innovation strategy has two approaches – an innovation inducement prize called the Oman Humanitarian Desalination Challenge Prize Competition carrying a $700,000 cash prize, and the international research call announced today with support from USAID.

The Oman Humanitarian Desalination Challenge Pathway Research Grants call looks for the development of a small-scale desalination unit capable of supporting a family with limited or no access to fresh water sources.  MEDRC is specifically looking for proposals that adopt a highly innovative approach, that might eventually lead to the development of the hand-held single user device that the $700,000 Prize looks for.

Last year MEDRC awarded a $90,000 grant under its USAID backed pathway research grants to Planet, an Italian startup who have secured the funding to develop their Mangrove Still – a bio inspired, modular, low-cost easy to use solar desalination system.

This year, MEDRC will award up to 3 research grants of up to a maximum of $150,000 each. The Funding Opportunity Announcement will be made monthly with applications accepted at the end of each month until the research funds are fully awarded.

MEDRC invites interested applicants to visit medrc.org/research/#grants for further details on the research call and to apply.