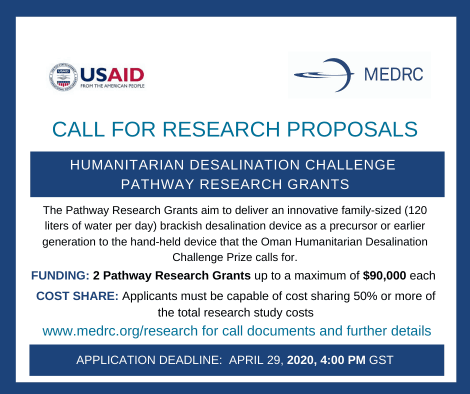 Posted at 07:57h in Uncategorized by medrc

In partnership with USAID, MEDRC has launched an international call for research proposals in a bid to spur innovation in small scale desalination technologies.

To engage the broadest possible community of researchers and innovators from across the world, MEDRC’s desalination innovation strategy has two approaches – an innovation inducement prize called the ‘Oman Humanitarian Desalination Challenge’ carrying a $700,000 cash prize, and the international research call announced today with support from USAID.

The Oman Humanitarian Desalination Challenge Prize is a joint initiative led by MEDRC and The Research Council (TRC) with funding provided by the Sultan Qaboos Higher Center for Culture and Science. The $700,000 USD cash prize will be awarded to the team or person that delivers a hand-held, low-cost, off-grid desalination device that can be rapidly deployed in the aftermath of a humanitarian crisis.

The research call announced today, looks for the development of a small-scale desalination unit capable of supporting a family with limited or no access to fresh water sources.  MEDRC are specifically looking for proposals that adopt a highly innovative approach, that might eventually lead to the development of the hand-held single user device that the $700,000 Prize looks for.

MEDRC will award up to 4 research grants up to a maximum of $90,000 each in 2020. The Research Call will be made in two installments throughout 2020, with each call awarding a maximum of two proposals.

The organization’s Center Director, Ciarán Ó Cuinn said ‘In desalination the R&D focus usually centers on upscaling desalination plants to help meet demand and guarantee returns on investment. Through the support of our partners The Research Council (TRC) and USAID, MEDRC is looking at the absolute reverse. We want to put the power of a desalination plant into the hands of an individual, offering them a means to safely produce clean fresh water for themselves and their families whenever, wherever they need it.

For further details on how to apply click here.